The active office: puts an end to protracted sitting

Scientists at the University of Queensland in Australia have observed 4,700 desk workers and taken a closer look at their movement habits. Result: the longer someone sits continuously at their desk for uninterrupted periods, the greater the risk of cardiovascular disorders. Those test persons who stood up and moved around more frequently had far better blood test results. They were also slimmer and generally in a better state of health. Among others, more movement in the workplace improves general metabolism and is beneficial for the joints and for bone density, as well as helping to avoid lifestyle disease such as type 2 diabetes. So it's about time we gave more thought to an active office environment.

An active office is good for more than just the cardiovascular system. There are also clearly measurable improvements in physical and mental capacities, as well as benefits for the psyche, as discovered by Spanish scientists. Those who spend more than 42 hours a week sitting down have a 31% higher risk of psychic disorders.

The prerequisite for an active office consists in workplace conditions that allow employees to move around more. In this context, experts speak of so-called extrinsic stimuli, in other words, a change in conditions and behaviour that is influenced positively from the outside. This should result in complex, spontaneous changes in position in such a way that they become an integral part of everyday working procedures.

Keep moving in the workplace

It's quite apparent that this involves more than just the desk and chair. The whole office workplace needs to be designed to encourage movement. This includes two working surfaces, each individually adjustable in height and alignment and each two thirds of the size of a normal desk. Not enough space, you may think, but both working surfaces make up one workplace. There is no shortage of space.

The smaller working surfaces prevent the desk from being used for storage and filing. The working surface is used only for the current project. Furthermore, both working surfaces are on an equal footing: both have a networked screen and keyboard for changing constantly between the two. The working areas should be set at an angle to each other to make it as easy as possible to change between sitting and standing.

But in view of the fact that standing on hard floors for a long time is just as unhealthy as sitting for a long time, it is worthwhile thinking about a special floor mat which, for example, can have integrated so-called 3D structures and a special elastic coating. They are reminiscent of a soft forest floor and trigger sensomotor activation between the muscles and the nervous system. The positive effect is that people can work in a standing position for much longer with fewer health implications and without fatigue.

The special structure actives the feet as well as the muscles and veins in the lower extremities. It is constantly necessary to keep adjusting the body balance almost subconsciously. This is super training for our vestibular system (sense of balance) and improves our attention span.

Active office chairs and active sitting furniture prove that there is no need to stop moving even when sitting. Seats that allow multi-dimensional movements – side to side, forwards, backwards and up and down – permit constant, scarcely perceptible changes in position. The moving seat animates the body to make constant tiny compensation movements, thus trigging precisely those groups of muscles that are important for stabilising the spinal column.

But it's not always necessary to go straight from standing to sitting. Those who prefer to work in a standing position may like to use a standing seats. Here too it is important to ensure that there is scope for multi-dimensional movements with individual adjustments in height. A middle column that tilts forward slightly ensures an upright posture and relieves the pressure on the intervertebral discs. Such standing/sitting solutions also strengthen the muscles in the torso and back quite incidentally as the user no longer stands rigidly but is moving all the time.

Those who need a little motivation to keep moving in the workplace may find digital trackers a useful aid. Sensors register the period of time spent sitting or standing. A little lamp reminds the user to change position. The little lamp stays on until the user has changed position. The lapse of time can naturally be chosen at will and, if desired, the whole system can be deactivated. The sensors also make it possible to evaluate the movement habits and to produce graphic displays. Such analysis can be an additional incentive to keep improving one's movement habits.

The effect of changing posture in the workplace and the associated alternation between exertion and relaxation should not be underestimated. Changing posture boosts creativity. It therefore makes sense to use sitting furniture where the user can sit, lie or even sprawl: anything goes, as long as it enhances regeneration. Comfortable sitting furniture reminiscent of the living room can also be used for dealing briefly with tasks on the laptop, tablet or smart phone, or also for a short meeting.

A back-friendly VDU workstation that encourages movement should improve the physical and metal capacities of employees working primarily with computers and electronic and digital devices. The workstation should therefore be designed to encourage a steady change in posture while working to promote back health and well-being.

Suitably coordinated workplace conditions (extrinsic stimuli) should make it possible for employees to organise their work processes to include as much movement as possible. Movement should be an integral part of every VDU workstation.

and as an option

aeris GmbH
Hans-Stießberger-Straße 2a
85540 Haar bei München
GERMANY
Phone +49 89/125018710
This email address is being protected from spambots. You need JavaScript enabled to view it.
www.active-office.de 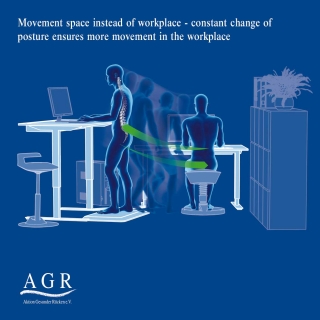 For more exercise in the workplace.