A screwdriver that helps driving screws

Screwdrivers are amongst the most frequently used tools overall. Professionals, for example electricians use them all the time, but also hobby DIYers can hardly get by without them. Anyone working with screwdrivers a lot is, however, more susceptible for developing pain in the wrists, arms or the shoulder area. Absent times due to these complaints are common. Ergonomic screwdrivers can help to prevent complaints from developing.

Epicondylitis radialis humeri is the term used by medical professionals for irritated tendon insertions of the extensor muscles of the wrist joint – more well-known as tennis elbow. In most cases the cause is an overburdening of the lower arm muscles. The tendons of the extensor muscles are attached to a quite small bone appendage on the outer side of the elbow. When using a screwdriver the whole force is exclusively transferred to this small bone appendage. And with continuous repetition this can lead to an inflammation of the tendons.

In addition to this, craftsmen often need to adopt awkward positions to be able to reach the screws at all. Therefore they often suffer from back complaints: Roughly 51 percent of all electricians need to undergo treatment at least once during their professional life due to back pain.

With the right screwdriver working in positions that are unfriendly for the back can be significantly reduced. In addition to this, continuous screw-driving becomes noticeably easier.

An example: Some electricians change up to eight electricity meters per day. With modern meters, also known as Smart Meters, this involves roughly 28 screws per change – with older models even double that amount. So in total this makes 200 screws that need to be changed every day. With a conventional screwdriver one thereby easily arrives at more than 1000 rotation movements daily. This is torture for the elbow and back – which can now be avoided.

However, a normal cordless screwdriver does not help here, because to avoid over winding the last turns need to be performed carefully by hand. The solution: Clever screwdrivers. They not only fit well in the hand, but they also offer an electric driving support.

Externally such modern tools are similar to a very normal screwdriver. The grips are sufficiently long and the surface is made of a non-slip material so that one does not slip off so easily. Inside the grip there is, however, a lot of intelligent technology. It makes work easy and significantly reduces strain. With the result: greater health at the workplace.

Just like conventional screwdrivers these screwdrivers with electric screw-driving support must have a comfortable force rotation zone - because they are to be used in exactly the same way.

Depending on the requirement, however, the screw-driving support can be added through an intuitively operated switch. For these devices right-left rotation is equally a matter of course as the easily exchangeable bits for different screwing tasks – which by the way belong to the standard equipment and should be consistent with the common standards.

Especially important for electricians is that the bits should not only be insulated, but also VDE approved for up to 1,000 volts. Especially narrow bits are additionally helpful to reach into small openings if the screw heads are recessed.

A long-life lithium-ion battery ensures an ideal drive. It can be recharged distinctly faster than it is discharged. So continuous working is possible with only two rechargeable batteries and the screwdriver is ready for use the whole day. 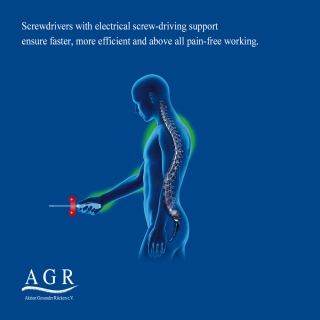