Muscles are team players – What does this mean for your strength training?

Muscles are not loners, they operate in a team. They have the task of allowing movement; put more precisely movement of joints. Joints are never only able to be moved in one direction but at least in two - often even in several directions, depending on the type of the joint. So for example a ball joint like the shoulder can in a complex movement sequence rotate in the joint socket - a hinge joint like the knee can by contrast only fold open or closed. But all joints have one thing in common: The contrary movement directions are made possible by every skeletal muscle having an antagonist or counter-player. Therefore during training one should also strengthen both muscle partners.

Through this you prevent muscular imbalance

We can find the probably most well known example for a muscle team in the upper arm. The biceps bend the elbow, the triceps stretch it. Among specialists such teams are known as agonists (players) and antagonists (counter-players).

These muscle teams are not only in the extremities, meaning in the arms and legs, but also in the torso. The spinal column consists of 22 vertebral bodies, which are connected to each other through small joints. The muscle situation in the torso is significantly more complex and many movements of the vertebral body joints are not only organised through two muscle partners, but through large teams. Especially with multi-dimensional, complex movement sequences many muscles act together in groups.

So our skeletal muscles function as a cleverly conceived but unfortunately also quite susceptible system of muscle groups working with and against each other. If for example the above described actor/counter-actor principle is not balanced it comes to so-called muscular dysbalances. These always arise when one muscle group works more strongly than would be necessary for the execution of the movement, for example because the muscles have become shortened, or when they work too little, for example because the muscles are overstretched. This is not only negative for the performance ability but often also for the body posture. For an upright body posture it does not only require good back muscles but also strong abdominal muscles.

In everyday life and during training many muscles are overburdened, whereas at the same time their counterparts are neglected. Unfortunately muscle training alone does not protect against muscular dysbalances. During training it is therefore important to always also think about the counterpart. This means: If for example you want to strengthen your back muscles to prevent or alleviate back pain then during training you must not neglect their counterparts, namely the abdominal muscles.

During training it is best to rely on concepts and devices that take the agonist/antagonist principle into account. Modern training devices such as for example an expander and impander are well suited for this.

How do expanders and impanders function?

Expanders are quite well-known. These fitness devices consist of two handgrips that are connected through one or several tension springs or tensioning ropes. Through the exertion of force the hand grips are pulled apart and then mechanically drawn together again. The disadvantage of expanders is obvious: With them it is not possible to perform any symmetrical training.

When training with an expander and impander it is quite different. Hereby both muscle partners are stimulated. This specifically means: The actor muscles pull the two handgrips apart and because they don't move towards each other again by themselves the counter actor muscles take over pushing them together.

Expanders and impanders for example operate with friction as resistance element. The friction intensity should be individually adjustable to be able to adapt the degree of difficulty. Then the training device can be used in therapy, as well as also for beginners training and even for high performance sport.

A further advantage of expanders and impanders that operate with a friction based force adjustment: They are light and offer a high degree of safety against injuries as they operate completely without weights. The result is a joint-friendly, safe and very effective training.

If one can effortlessly reduce the size of the device then it is easy to transport. So then one can also train on the go. A compact and easily understandable brochure should explain the handling of the expander and impander.

Expanders and impanders are above all suitable for training of the upper body and the upper extremities. Muscle groups of the arms and the upper body can be trained at different intensities. Also exercises to strengthen the rotator cuff of the shoulder, which causes many people problems, are possible. The rotator cuff is a combination of four muscles and the tendon cap. It contributes towards stabilising the shoulder joint and allows rotation movements.

At the moment unfortunately no. 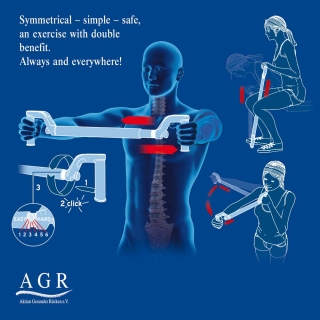